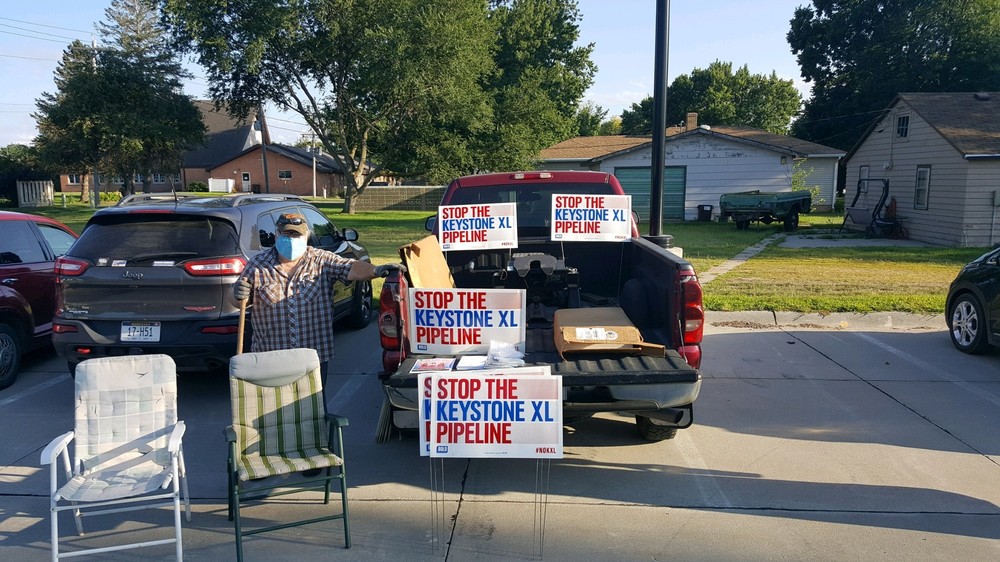 Plainview’s Zoning Board gathered for their regular meeting on Monday August 3rd at 7 p.m. in the library conference room. Along with approving recommendations for building permits, the board also heard a presentation from TC Energy about their application for a special use permit for a temporary workforce housing RV camp and contractor yard, that would be located approximately half a mile west of Plainview.

In a letter to the City of Plainview, TC Energy Land Manager Brock Taylor stated that the camp is expected to operate for one construction year, starting in 2021, and would house approximately 600 employees. Taylor also stated in the letter that site construction would start in the first quarter of 2021, and would have an open date between May 1st to June 1st. The letter also requests that the camp be allowed to remain open for an additional year, dependent upon the progress of the pipeline construction, which is reflected in the special use permit application.

The application, dated July 24, 2020, totals over 190 pages and consists of seven sections and five appendices. The sections include a response to the city’s zoning T-12 Checklist, a finalized lease agreement with land owners James and Tonda Aschoff, a site plan, overall development plan, utitlity, water and sanitation information, emergency medical, fire and law enforcement services, and proposed access points to the camp. The appendices include a preliminary geotechnical report, emergency action plan, code of conduct for the proposed camp site, a Nebraska noxious weed plan, and a stormwater report. For those interested in viewing the application in its entirety can visit the Plainview City office or The Plainview News office.

Rick Perkins, a representative of TC Energy working out of Omaha, was present at the meeting to lead the presentation. Perkins was accompanied by Land Manager Brock Taylor, along with the company’s permit specialist, a professional engineer, a security expert, and others. Following introductions from Plainview’s zoning board members, Perkins said he wanted to jump right in and answer any initial questions.

Zoning Board President Tim Utecht asked the majority of questions over the course of the evening, ranging from what the company was going to do and how they would operate the site in general, to questions about the workforce, if workers would be bringing children, and how the camp site would be connecting to the city’s water and sewer infrastructure.

Perkins fielded many of the board’s questions, and started with giving a general overview of the pipeline project itself, and explaining the issue of why they were construction worker camps in this part of the US to build the pipeline. He explained that for a project of this size, their required workforce could not find enough available commercial lodging, and that campgrounds were their best solution. He also said that the proposed camp for Plainview would have a max population of 600 people which would have a 10 hour shifts, six days a week. The crews would also be transported to work sites in an approximate 60 mile range to the north, west, and southeast.

Perkins also explained that TC Energy had planned eight camps in total, although Plainview’s proposed site would be the only RV camp. Additionally, the camp would consist of a contractor area for offices, a commissary, a laundry area, and a guardhouse with 24 hour security personnel and 24 hour video camera surveillance. He added that an infirmary area may also be added, depending on the conditions of the COVID pandemic.

A few of the camp’s general rules were also covered, including their screening and alcohol policies. TC Energy’s attending security advisor told zoning board members that all employees are screened, and that no sex offenders or contractors with two or more DUI’s are hired. Perkins also said that all contracted companies are required to do background checks on their employees.

Perkins also explained that while they do allow alcohol to be consumed, that no one in camp site would be allowed to carry open containers or consume alcohol in public areas. Perkins added that any consumption of alcohol would have to be done within the trailers, and that alcohol would also not be sold within the camp.

Perkins added that the company had a zero tolerance policy when it came to possessing firearms and drug use, saying that those people found violating those rules would be immediately discharged from camp. He also said that while those individuals would be kicked from camp, they couldn’t be fired, because they would be union workers. Zoning Board member Dean Boyer followed up by asking if people were ejected from the camp, but not fired, if they would potentially become the city’s problem. Perkins responded by saying that he hoped that wouldn’t happen, adding that when he talked with union representatives, they had told him that people who are problems are generally fired from the union.

The zoning board meeting was also attended by a few representatives from Bold Nebraska, an organization trying to stop the Keystone XL pipeline project. Bold Alliance Founder, Jane Kleeb spoke towards the end of the zoning board meeting, saying that the organization had gathered over 15,000 signatures for a petition to halt all pre-construction activity in the face of the public health threat from COVID-19, stating that it puts rural communities at risk. Kleeb also mentioned that the Supreme Court had recently declined a request from TC Energy for a water crossing permit, essentially barring the construction of the Keystone pipeline through rivers and streams while an appeal is being heard.