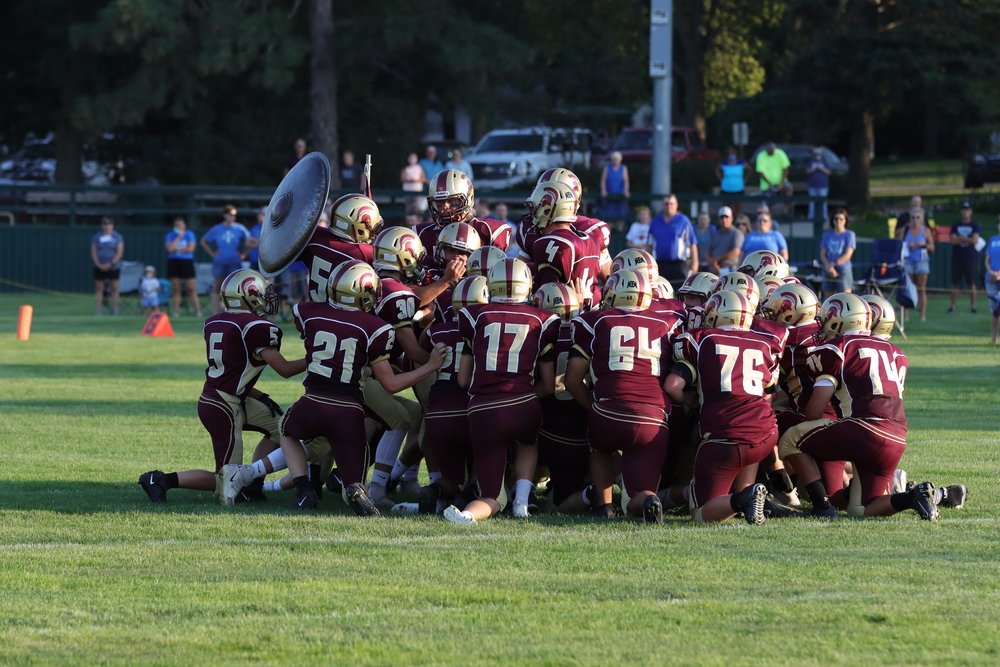 A second-half surge, special teams and some unexpected depth paced Wakefield to a 36-22 win over West Point Guardian Angels Central Catholic in both teams’ 2020 football opener at Eaton Field on August 26.

“It was your typical first game, things didn't go as planned or scripted, and we found out we have a lot of things to fix,” head Trojan Mike Hassler said.  “We are right where I expected us to be and now it's time to really roll up our sleeves and start improving every week.  The thing I was most proud of was our depth, we had a lot of kids step up, especially in the 2nd quarter when the heat started to get to us.”

Hassler elaborated on the developing depth.

“All the subbing we did in the first half allowed us to be fresh after halftime, and when GACC started to fade in the 4th Quarter our boys saw the blood in the water and attacked.”

Special teams paced Wakefield in the first half.

Blake Brown raced 38 yards for a score on a punt return then hit Nick Arenas for the  two-point conversion to put the Trojans up 8-0 with just under four minutes left in the opening quarter.

GACC tied the score with 5:19 left in the first half on a short run after a long drive, but Wakefield took just 13 seconds to regain the lead.

Logan Bokemper took the ensuing Bluejay kickoff and scooted 72 yards through and around the GACC defense to put the Trojans back on top 14-8 after a run failed for the extra-points.

The Bluejays responded with a four-play drive then converted the two-point try to take a 16-14 lead with 90 seconds left before the intermission.

Brown answered again before the half.

“They (GACC) really put their defensive focus on shutting Justin (Erb) down, and we anticipated that teams would do that coming into the year, so we made an effort to get a run package in for Blake that countered what we felt teams would do to shut down Erb,” Hassler said.  “Blake capitalized on it and we showed a lot of teams if they want to load up to stop one player we have a lot of other weapons to make them pay.”

I thought we handled our halftime adjustments well, kept our composure, and just stayed the course.  We played Wakefield Trojan Football.  We out rushed them on the ground, had fewer penalties, and won the turnover battle along with special teams.  You win all four of those categories and you are going to find yourself in the win column a lot.

In the second half, Wakefield went back to being Wakefield of recent seasons and went to the run to take care of business.

GACC took the second half kickoff on another long drive and tied the game with 6:49 left in the third frame.

Erb and Brown took over from there.

Brown ended the game with 134 yards on the ground while Erb ran over the Bluejays for 79 yards, most of them in the second half.

“It was good to get our new offensive line a game under their belts.  Consistency and communication will be the key moving forward,” Hassler said. “We had some blown assignments and missed communications, which really never allowed us to get into a rhythm - I felt the effort and physicality were there though, that I can work with, the other things we can fix.”

Erb blasted in from the one then ran in the conversion with 7:03 remaining in the contest then Brown scored from 34 yards out to put the game away.

The Trojan defense took it from there and held the Bluejays the rest of the way.

“The defense is the side of the ball that I really felt our depth paid off in the second half,” Hassler said. “Gio Salcedo, Brandon Avila, and Kaden Kratke gave us depth up front and allowed us to get starters a rest and on the back end of the defensive unit Samuel Nuno and Jeremiah Chase came in and did a good job - to have that kind of depth will be a valuable weapon moving forward.”

“Obviously we have things to fix, we had some alignment issues that put us in bad positions,” Hassler said.  “There are definitely some technique things that need to be cleaned up as well, but I really like where we are at this stage.”

Wakefield will move on this week with a trip to Wisner-Pilger to take on the Gators.

“They (W-P) have proven themselves to be a solid program since dropping down to 8-man,” Hassler said. “They are similar to us in that they have some holes to fill, but they play fast and aggressive.”

The Gators lost to Laurel-Concord-Coleridge last week, 22-14, after losing a single game last season - to Wakefield.

“There are no easy games this year,” Hassler said. “They will test us and let us know if we have taken any steps forward since GACC.  I fully expect to be in a four quarter battle again.  We will continue to focus on what we do and execute the plan, that's all we can do.”