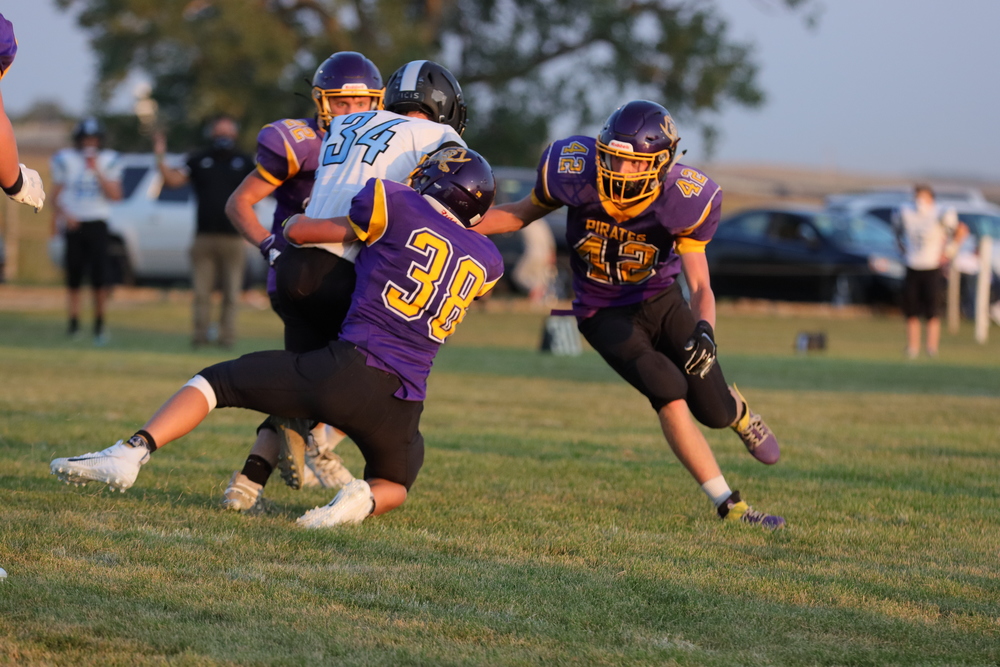 After trailing Cedar Bluffs 8-0 early in the game, the Emerson-Hubbard Pirates found their sea legs in the second period to head to the half tied 16-16, on the way to a 46-36 win to move to 1-0 on the young season.

“We got off to a slow start but once we got some traction we played pretty well for the first game,” Pirate coach Joe Kvidera said. “I thought we gained confidence through the game and we saw some very good growth as some of the guys grew into starting positions.”

The Pirate defense held the Wildcats in check in the third frame while the offense posted a pair of touchdowns to make it 32-16 heading into the final quarter.

Cedar Bluffs did manage 20 points in the final 12 minutes, but the damage was already done and the Pirates held on with a couple of touchdowns of their own.

Ryan Kinnaman paced the EH offense with 96 yards on nine carries and five receptions for 45 yards during the game.

Pirate quarterback Brock Mackling had a more than respectable night, completing seven-of-10 passes for 69 yards with no interceptions and carried the ball for 62 yards with four scores.

Defensively, Ethan Eriksen recorded 13 tackles; Mason Hall had 11 stops and two interceptions; Zack Shanks had 11 tackles, including a sack and Garrett Blanke ended the night with 11 tackles and a blocked pass.

The Pirates will hit the road for the first time on the season when they head to Humphrey where they will take on St. Francis, which defeated Wynot 56-14 last week and is the returning Class D2 State Champion.

“We are going to need to stay focussed this week as we have the defending D2 Champs,” Kvidera said. “We are looking forward to this challenge and are happy we are still playing football given the COVID-19 situation.”