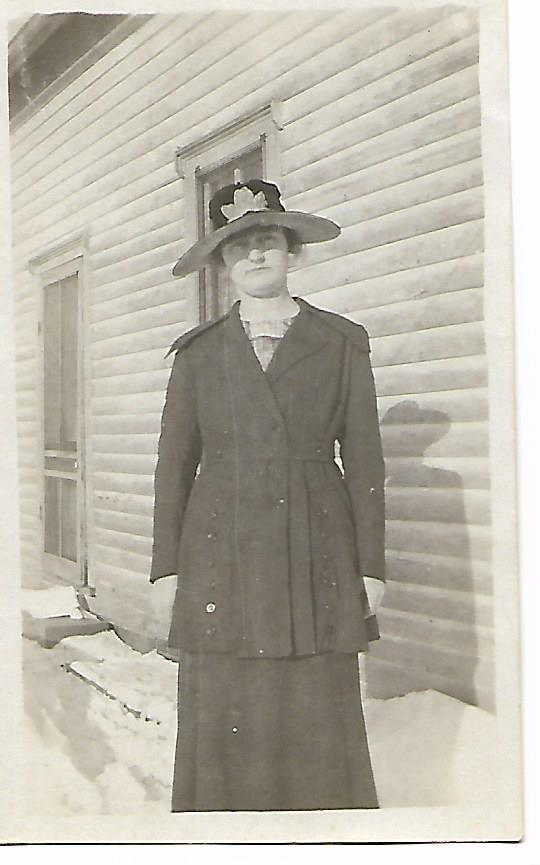 Grandmother was part of suffrage movement

On August 18, 1920, the 19th Amendment was ratified granting women the right to vote.  This year marks the 100th anniversary of the Amendment.

The Nebraska Legislature passed a limited suffrage act in 1917 giving women the right to vote in municipal elections and for presidential electors. However, women still could not vote for candidates for statewide offices. In August 1919 the Nebraska Legislature, in special session, unanimously ratified the nineteenth amendment to the U.S. Constitution. A year later, Tennessee became the 36th state to ratify the federal amendment, and women were finally allowed to vote in all elections after August 26, 1920.

Plainview resident, Judy Green, had a grandmother who was 22 years-old when women were granted the right to vote.

Sadie Bissey Watson was an intelligent woman and after her high school graduation, the Dean of Doane College in Crete made a personal trip to the farm to try to convince her father to allow her to go to college because she was so very smart.

The college was offering a full scholarship; but her father’s reply was, “women don’t need to go to college.” Sadie Bissey went on to be a full-time teacher by the age of 18 and married at the age of 21.

The spring of 1915, Watson wrote the following commencement speech for her graduation at 16 years old:

“In an Eastern town a few years ago there lived a widow with her two sons.  The father of these boys had been a drunkard and had filled a drunkard's grave.  The aim of the mother's whole life was now to shield her boys from a temptation for which they had a natural longing.  It was a struggle which would not be less as the boys grew up to young manhood with their father's heritage upon them.

In due time, the question of a saloon came up before the peoples of that village, the proposed location of the saloon being but a few doors from the widow's humble cottage.  On the election day, how she longed to cast her vote against this great impending evil and no sleep came to her till the election returns were reported - a majority for the saloon by one vote.  It is the possibility of that one vote which we wish to consider tonight.

This question - that of woman's suffrage is one of the leading topics of today and since it is not yet settled in our own state is one of interest to all Nebraska citizens.

The origin of this movement dates back to the time of Mary Lyon who was one of the first to urge the education of woman.  She based her claims for this on the growing feeling that woman was really man's equal mentally and therefore should have the same opportunities in mental training in order that she might in this way be qualified for voting.  Most of the men and women of that time ridiculed her efforts instead of trying to help her cause.

Anne Hutchinson, Lucretia Mott, Elizabeth Cady Stanton, and Susan B. Anthony were also important leaders of the educational and suffrage movements in the early times and it is to their persistent efforts, in spite of ridicule, that we owe much of the later importance of the question.

Lucy Stone and Henry Blackwell opened up the campaign in Kansas in 1867.  They went thru many difficulties to hold their meetings but in the end the amendment was lost.  This was a great disappointment to those who had labored so untiring for it's success.  Two years after this the women of Wyoming obtained the suffrage.  They were the first ones in the United States to get it.  Colorado came next in 1893 and was soon followed by others until now there are eleven states in the Union in which women have the vote and twenty-two states which have partial suffrage.

Women are citizens in a government of the people, by the people and for the people, and Nebraska women are people, therefore they should vote equally with men.

Formerly, only a few men had the right to vote.  The voters had to have certain religious and property qualifications but after the Revolution the religious qualification was removed.  The argument against the enfranchisement of more men was that the cost would be too great.  This same argument is used against the enfranchisement of women but the increase in the cost of the elections would be small compared with the justice of it.

A man is not asked whether he will use his vote if allowed to become a voter, he is not asked if all men want to vote, if he thinks the laws need changing, if he will promise to better the laws, if he is sure he can still be a good father and vote and if he can remain attractive after he votes.  Yet woman is asked to prove all this before she has the right to vote.

There, too, woman is now man's equal educationally.  The High Schools of every state in the Union are on an average putting out more girls than boys.  Our own class is but one example from the many.  About four-fifths of the teachers in Nebraska are women.  If the women are qualified to educate the voters, do they not know enough to vote?  When the employment of women teachers was first proposed, it was said that women could never govern the schools and control the rough boys.  But women teachers were employed and success has come from it.

The women of Nebraska are as intelligent and worthy of self-government as they are in those states which have given them the franchise.  In the elections in these states they have shown as good judgment as the men.

One objection to woman suffrage often made is that politics is too dirty for women to mingle in.  But it is an argument against male suffrage rather than against woman suffrage.  If the men have allowed politics to become dirty it is time the women cleaned things up and women are famous for their house-cleaning ability.  One woman said, "If politics is not fit for my girls, it is not fit for my boys."

Many claim that woman has not the time to vote, that if this duty is placed on her it will mean that the home will be neglected.  But even the male voter does not vote all the time but is allowed a number of days off in order to attend to his private business.  Women are expected to attend to the health and welfare of their children but they cannot do this unless the conditions are favorable.  The Mother is the one who is responsible for the cleanliness of her house, the wholesomeness of the food and most of all for the morals of the children.  She can clean her own rooms but if the neighbors are allowed to live in filth, she cannot keep her rooms from being filled with bad air.  She can cook her food well but if dealers are permitted to sell poor food she cannot make it wholesome.  She can send her children out to give them the needed air and exercise but if the surrounding conditions are degrading, she cannot protect them from these dangers.  The Mother cannot make these things right, but the city government, that is elected by the people to take care of the interests of the people, can do it.  First, the officials of that government and second, those who elect them decide what the government shall do.  The women do not elect them but the men do, so after all it is the men and not the women who are responsible for the unclean houses, unwholesome food, and the immoral influences on the street.  But nevertheless the women are held responsible for these results, so let them have something to say as to what these conditions shall be.

It is claimed that woman is an emotional being, that she will not take large and disinterested views of public questions.  But do you men always take the large and disinterested view?  A glance at politics will convince us that many men, including the crowned heads, do not take this lofty viewpoint.  Woman is more a creature of intuition, man plods to a conclusion, woman leaps to it.  But both these qualities are needed together to work for the good of the state.

Men say that women are already represented by their husbands, fathers and brothers.  Let me give you an incident which shows the injustice of such representation.  On one side of the road lives a man who has a wife, a widowed mother, four or five unmarried sisters, and half a dozen unmarried daughters.  His vote represents himself and all those women, and it counts one.  Just across the road lives a bachelor, without a female relative in the world and his vote counts for just as much.  Since the object of taking a vote is to get the wish of the majority, the only fair way is for each grown person to have one vote and cast it to represent himself or herself.

Certainly everyone will admit that whatever promises to deliver us from the grip of the saloon is of supreme value and the women will do this if they have the chance.  What mother wants her son's life to be ruined by the saloon?  Men may come to see this danger in time but it is the woman whose heart has been broken and happiness ruined by this foe of the human race and it is she who is most bitterly opposed to its stay.  If it were otherwise, why do the brewery interests fight woman suffrage with sums of money which mount up to the millions?

Up to this time it has not been distant states which enfranchised their women but those which border directly on a state that has woman suffrage and they must necessarily have known what was going on just across the border.  If there had been any bad effect of woman suffrage in these states, the women of the bordering states would never have wanted it.  If you hear charges against the workings of equal suffrage in some state in which it has been adopted there is one answer you can always give.  Ask the opponent why it is then, if equal suffrage works so badly, that it has been the nearest state that extended the franchise to their own women.  And, too, no state has ever repealed the amendment for woman suffrage which had once adopted it and several of our states have tried it long enough to test it's success or failure.

We have shown you, therefore, that partial suffrage, that of men alone, is a denial of democracy.  There is no true liberty in this democracy while women are free only to be governed and not to govern.  This reason alone is sufficient for giving woman the ballot and greater than all other considerations.  We have also tried to show that suffrage will be good for woman to broaden her horizon, and to give vent for her mental activities.  We have shown that suffrage will be good for the family, giving woman the power to protect it and create the proper atmosphere around it and that suffrage will also be good for the state.

It is in your hands, men of our future Nebraska, to give her this right. You entrust your dearest interests to woman, you confide to her keeping.

Now, after all the reasons I have given why women want to vote and why they should, we, as the women ask all those who have the privilege of voting to vote for the 306th Amendment which will give the women of Nebraska the franchise.”