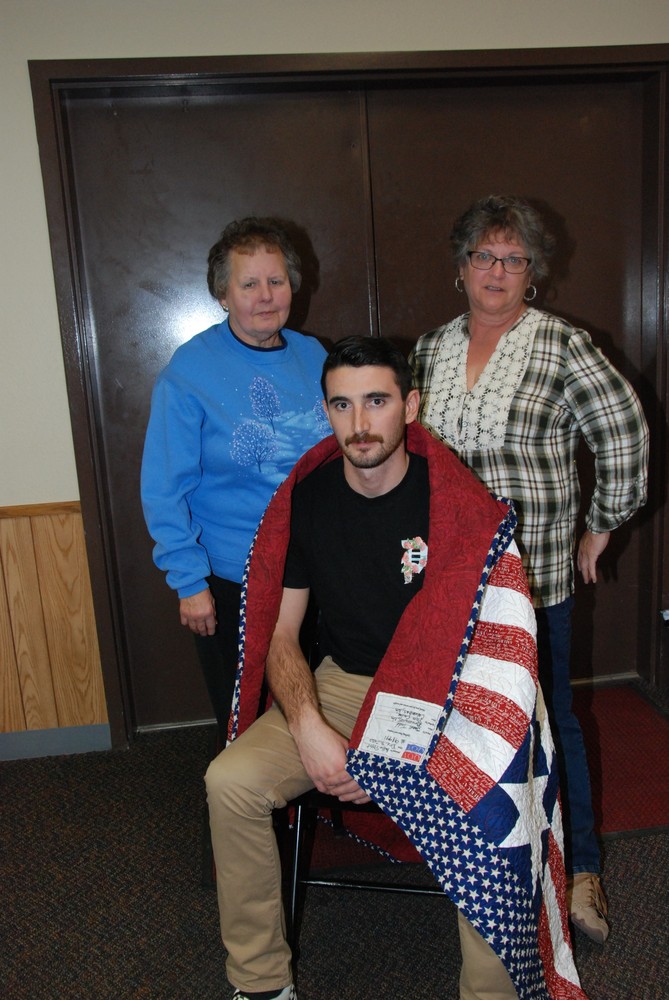 Austin Pittet of Brunswick is presented a Quilt of Valor by Brunswick’s Verner A. Baird American Legion Post 357 and the Brunswick Auxiliary during the organizations’ annual Christmas party Saturday, Dec. 5 at the Brunswick Fire Hall meeting room.

The quilt was presented by auxiliary president Linda Wahrer and Vice President Janet Todd, who crafted the quilt, which she recorded with the Quilts of Valor Foundation.

A Quilt of Valor is a handmade quilt awarded to a service member or veteran who has been touched by war.

According to the foundation’s website, "The quilt says unequivocally, 'Thank you for your service and sacrifice in serving our nation.’"

To use the term Quilt of Valor, Quilts of Valor or QOV, the quilt must be a specific size, must have a label with required information, it must be awarded (it is not a gift) and it must be recorded.

Pittet served four years with the United States Marine Corps., including deployment on two tours of duty. He served as security at the American Embassy at Bahgdad, Iran, and a tour based out of Kuwait, which included action in Syria and other areas.

A 2012 Plainview High School graduate, he is currently employed by JE Meuret Grain Co. in Brunswick.

Pittet is the son of Chad and Missy Pittet of Brunswick. His grandparents include Dwight and Mary Pittet of Plainview and Larry and Sandy Schroth of Brunswick, along with a great-grandmother, Marge Beed of Neligh.

He joined the Marines in 2014, following in the footsteps of his late great-grandfather, William Beed.