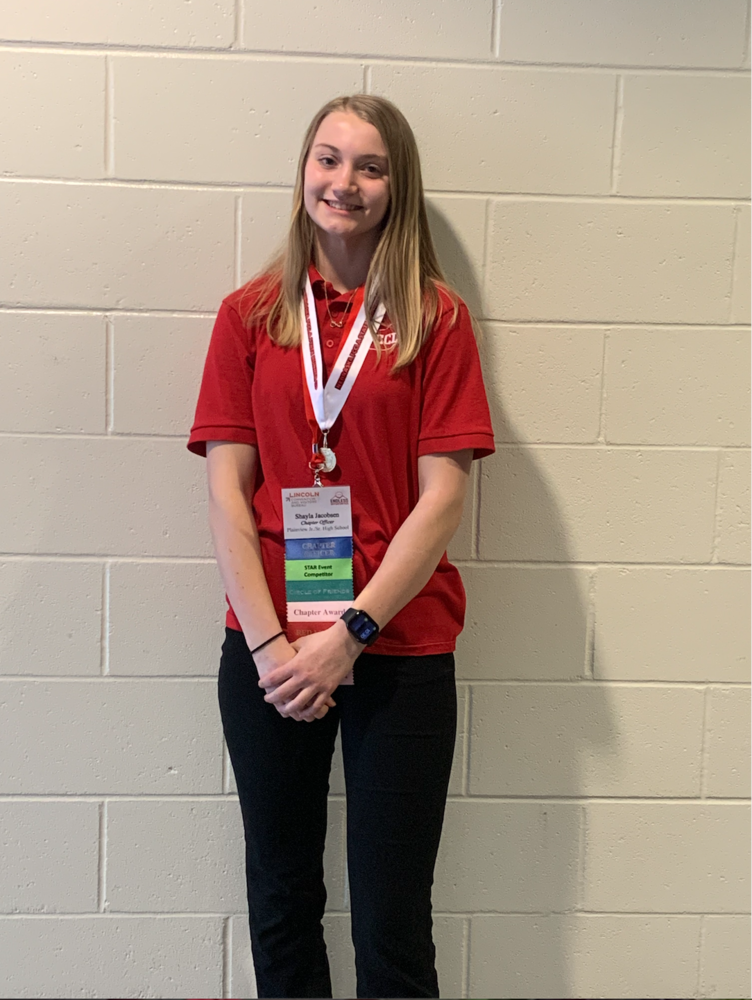 Shayla Jacobsen brought home the gold with a second place finish and earned a trip to the National FCCLA STAR competition for the second year in a row at the FCCLA 2022 State Leadership Conference held April 3-5.

“Endless Opportunities” was the theme of the conference which Shayla Jacobsen, Baili Prewitt, and Weston Hoffman along with adviser Ronita Jacobsen and parent sponsor Paula Hoffman attended.

“Due to COVID, this is the first in-person state conference we’ve had in two years, making this the first state in-person conference for these students,” said Jacobsen. “Shayla is excited about attending Nationals since last year’s STAR Competition in Nashville was virtual.”

A Parade of Chapters was held during Opening Session.

Co-President Shayla Jacobsen carried the Plainview chapter banner across the stage in representation.

The keynote speaker was EJ Carrion.  His message was to help members to recognize fear and move through it to achieve success and to understand the importance of showing up and bringing your whole self to create the life you want.  He talked about how to lead during times of discomfort and how to grow outside of your comfort zone.  Through humor and storytelling Carrion reached his goal to get students comfortable with themselves and not be afraid to stand out.

Monday was a busy day as STAR Competitions were held and members participated in tours and attending sessions and trainings.

Shayla Jacobsen had her STAR Competitors orientation at 8 a.m. and then competed in the STAR Repurpose Redesign Event at 10:30 a.m.  STAR Results and Awards were announced Tuesday morning during the STAR Awards Session.

Jacobsen received the Runner-Up Gold Medal for her Repurpose Redesign Project “Spindle Shelf.  This placing qualified her for nationals which will be held in San Diego, California at the end of June.

“I am very proud of Shayla. By taking suggestions from district judges and modifying her speech and presentation, she accomplished her goal of earning a gold medal and qualifying for nationals. Her next challenge will be to take state judges’ comments and improve her presentation for nationals. Her goal is to earn a gold at nationals,” stated adviser Ronita Jacobsen.

Members not in STAR were busy with tours on Monday.  Weston Hoffman and parent sponsor Paula Hoffman toured the UNL Food Processing Center Monday morning.  The tour was one the highlights of the trip. “I found it very interesting that well known food companies hired UNL food processing program to develop new formulas,” stated Weston.

Monday after lunch all members took advantage of the Opportunity and Career Fair to visit with college representatives and organizations.  While at the fair, students enjoyed visiting with college representatives and learning more about their colleges and programs.   Students also learned about Distracted Driving Programs, fundraising options, and other various programs of student interest.

Following the fair, Co-Presidents Baili Prewitt and Shayla Jacobsen attended the Voting Delegate Session, with Prewitt serving as the Voting Delegate.  They heard State Officer Candidate speeches, responses to a thought question, and watched the candidates complete a “Fishbowl Activity.”

During that evening’s Business and Recognition Session, Prewitt casted the chapter’s voting ballot.

During Monday night’s Award’s Session, the Plainview Chapter was awarded the Chapter Award-Gold Star Plaque, which is the highest rating available for chapters.

The award reflects FCCLA members’ Program of Work for the current school year.  To earn this award, members set realistic goals for themselves and conduct a balanced chapter program of work that is related to the family and consumer sciences program.  The chapter had 12 specific tasks they needed to complete and document in the following areas: Membership, Leadership, Competitive Events/Programs, and Promoting FCCLA.

The chapter was recognized a Circle of Friends for sponsoring a STAR Awards trophy.

A trophy was sponsored in memory of Evelyn Kroeger, who throughout the years helped her grandchildren with their STAR Projects.   The chapter was also recognized for completing a Feed Nebraska project which was collecting food for the Plainview Food Pantry.

Also recognized was Shayla Jacobsen as she received the 3 Musketeers Award for recruiting three or more new members. Adviser Ronita Jacobsen was recognized for completing 25 years of service to FCCLA as an adviser. 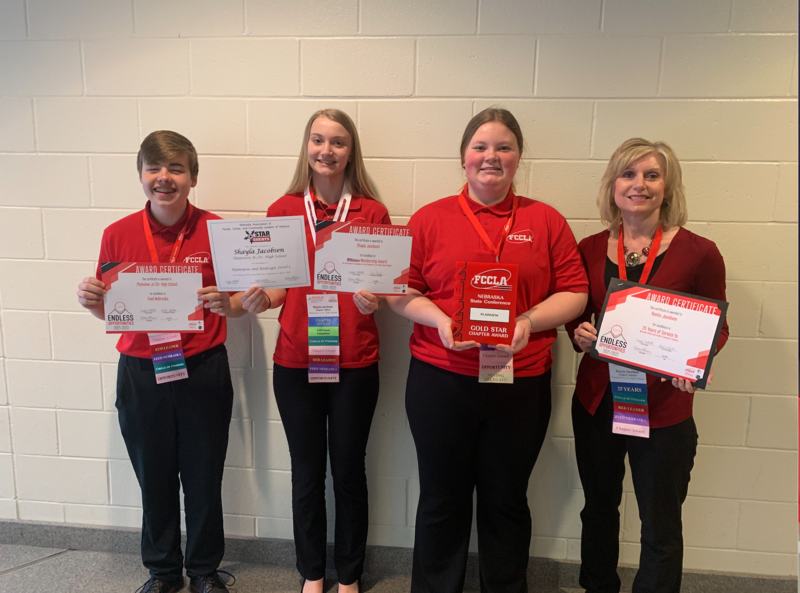