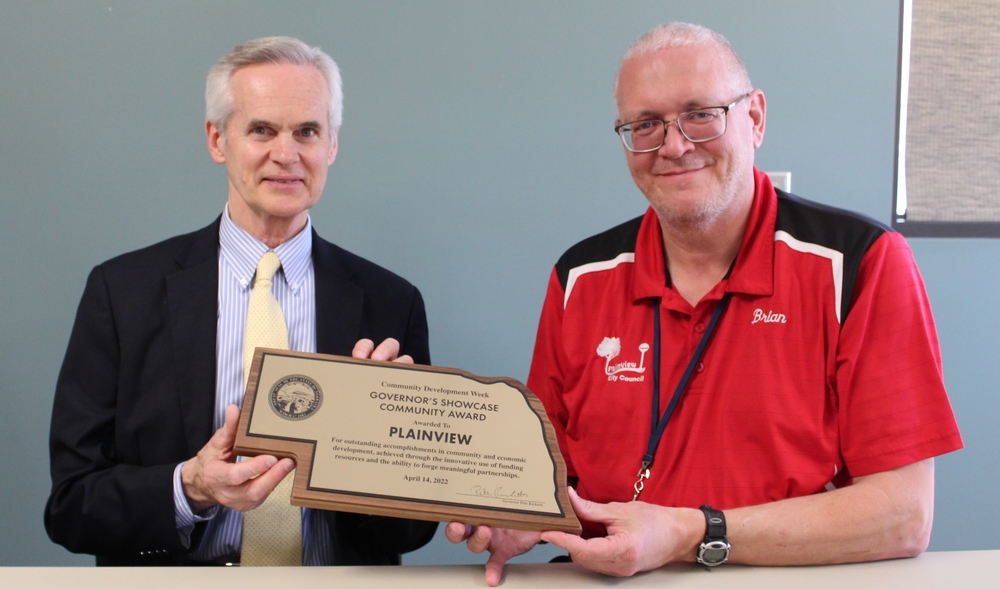 City council members met for their regular monthly meeting on Tuesday, April 12th to review and take action on city business, including the announcement of the Governor’s Community Award, the purchase of a new street sweeper, and hiring additional workers for summer.

Susan Norris announced that Plainview had been selected as the 2022 Governor’s Showcase Community award during her report to city council members. She stated that the award was given based primarily on the recognition of local and economic development over the last five years.

Norris submitted an eight page application on behalf of the city, outlining how the city developed goals and implemented strategies for growth, the partnerships between the community and local and regional organizations, highlighted specific areas of business and residential growth, community, and other development projects undertaken by the community. Norris also said that Plainview had competed against approximately 80 other communities that had also submitted applications, including communities such as Norfolk. She also stated that the Lt. Governor of Nebraska would be coming to Plainview on Thursday to give the award and hoped that council members would attend (see related story on Lt. Governor’s visit elsewhere in this edition).

Council members also discussed the purchase of a new street sweeper for the city at their meeting. Council members heard from city employee Troy Johnston, who told the council that he had been communicating with Sioux City employees about the sweeper. Johnston also stated that he had a chance to inspect and test drive the machine and that it worked as intended. Johnston also answered questions from council members concerning the current city owned street sweeper, saying that the current model had been used by the city for over 15 years, was 1994 model, and needed constant labor and oil to keep it maintained and functioning.

City Administrator Jeremy Tarr said that while he had previously discussed the need of a new street sweeper with the council, there had been no money set aside in the current budget for it. Tarr went on to confirm that the city would need to get a loan for the $50,000 street sweeper purchase, and that the payments would need to be accounted for in future budgets. He added that while the purchase was not planned for this year, that it was a rare opportunity to find this piece of equipment in good condition for this price.

Council member Bob Smith said that he preferred to wait to see if gas prices go back down, which would possibly eliminate the contract rate increase it caused, before making any changes to customers rates. Council members agreed to table any trash rate increases for customers for the time being.

-Council members discussed the possibility of changing the city’s current police and utility dispatch service by creating an interlocal agreement with Pierce County. Officer Haddock told council members at the meeting that the current system had issues and she had received some calls hours to days later. Haddock said the delays could cause issues to escalate if she couldn’t deal with them in an immediate manner. Council members agreed to move forward with the process of drafting an interlocal agreement with Pierce county and, if an agreement was reached, new protocols could go in effect by July 1st.

-Council members approved the pool board’s recommendations to hire a number of hires for summer work, including new and returning guards. Council members also approved motions for wages for pool employees for the manager, returning guards, and new guards at $11.75, $10.00, and $9.50 an hour, respectively. Council members also approved season passes to be set at the same price as the previous year, those being $125.00 for families with more than four members, $100.00 for familes of up to four members, and $60.00 for single season passes. Day passes will be $3.00 for adults, $2.00 for Kindergarten through 6, and free for 5 years and under. Finally, council members approved the hiring of a single seasonal park employee for $9.50 an hour.

-Council members approved two keno grants. The first for the Plainview Historical Society for $1,000.00 to help with the costs of running electrical to the Red Barn. The second approval was for the Jr. Pirate Posse in the amount of $5,000.00 to help with the purchase of new playground equipment. It was reported that the school would match any funds raised by the group for the purchase and installation of the equipment, which was estimated to be completed by May of 2023.