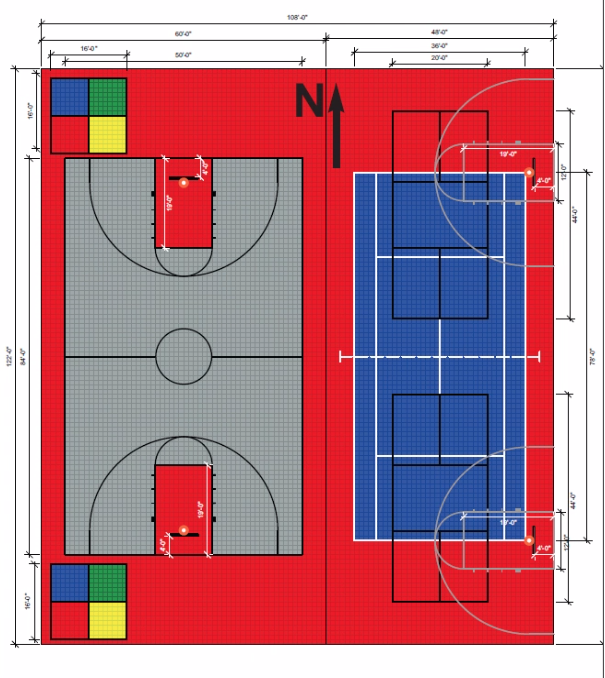 The Plainview Brunswick Community Fund (PBCF) approved the transfer of funds to the City of Plainview to complete the tennis court resurfacing project that the group has been fundraising for over the last year.

The approximately $105,000 project to resurface the Plainview tennis court and Brunswick basketball court was unanimously approved by the City Council at their last meeting, and with that in hand, the PBCF made their unanimous vote to transfer the more than $98,000 that had been raised in support of the two-location project.

For Plainview, the same ‘Duracourt’ material will be used to cover the tennis courts in Chilvers Park, lending a new tennis court, and one full basketball court to the project, along with lines for pickle-ball, two more half-court basketball courts and two four-square courts as well.

The surfacing will be primarily red, with blue for the tennis and pickle-ball courts and grey/white for the basketball courts.

The PBCF has also planned some park benches to be installed at the ends of the court for viewers, and the group agreed to assist the community of Brunswick with the fundraising/account management for their “musical equipment” being added to the Brunswick park as well as a separate project.

The Plainview Brunswick area had donors of around $70,000, including a recently made $30,000 anonymous donation to benefit both parks specifically, and the receiving of a $30,000 grant from the Lower Elkhorn Natural Resources District that capped off the fundraising of the project. The remaining funds were all raised through local donations.

The PBCF wanted to express appreciation for this “first” of many projects that the Board intends to complete in the Plainview Brunswick combined area, and as it continues to raise funds for the proposed Community Building, and also the primary focus of the group, the long-term endowment, the Board hopes that everyone will remember the possibility of donating when the time comes.