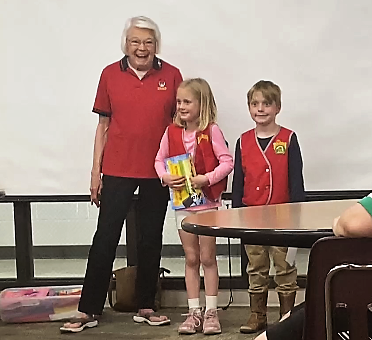 The final night of AWANA found kids in their uniforms waiting to be awarded for their hard work throughout the school year. The event started at 6:30 p.m. and took place at the Plainview High School, with the award presentation occurring in the library. Cookies were shared after everyone had received their awards.

First, the volunteers who regularly came to help children with their activities were acknowledged and awarded for their time and work.

Next, the Sparks received their awards. These consisted of jewels that they received for completing sections in their books, as well as book ribbons for those that had completed an entire book.

Students having received jewels include the following:

The Truth and Training students were next. These students ranged from third to sixth graders.

All of the third through fifth graders studied the “Grace in Action” book, receiving a badge for every four sections that they completed.

Students having received their first badge include Owen May, Kendrick Fernau, and Genesis Sinkler.

Students having received their first and second badges include:

The AWANA club will start again next September, taking place on Wednesdays between 6:30 and 7:30 p.m throughout the school year. Updates concerning AWANA events can be found on the Plainview Community Awana Facebook page.