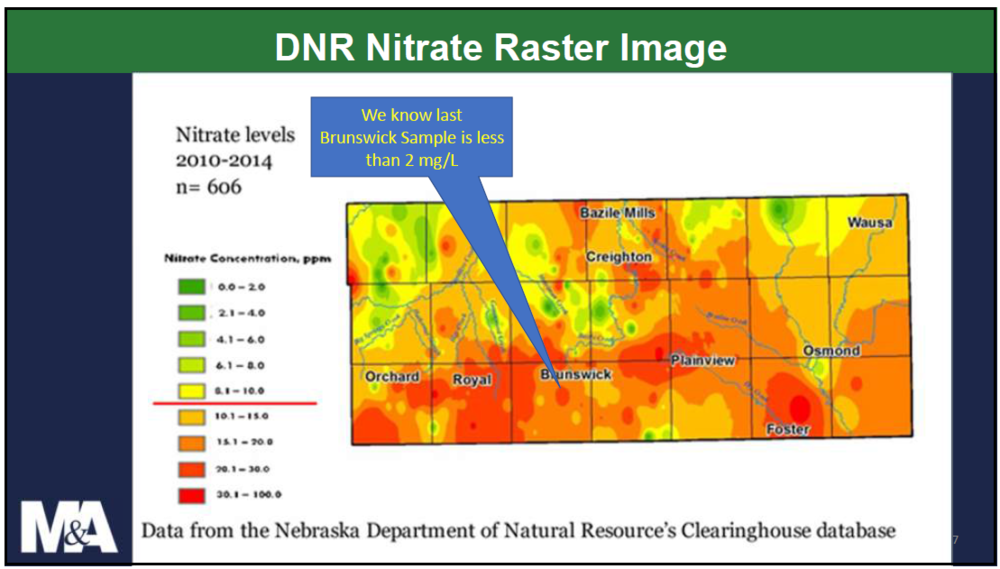 The Plainview City Council heard report from engineering firm, Miller & Associates, on the findings of research done to help the City remedy it’s administrative order to find a new, lower-nitrate water source that was issued in 2021.

In January of 2021, the Nebraska Department of Health and Human Services issued an administrative order to the City of Plainview to find a remedy for “nitrate levels in your water system consistently [exceeding] the maximum contaminant (MCL) level” as established by the DHHS governance of public water systems.

Since that time, the City of Plainview has been searching for a new well location to draw lower nitrate water from, with Miller & Associates delivering their findings at the June meeting.

The City was given the following timeline to remedy the issue:
* April 14, 2021 – retaining a registered, professional engineer;
* July 14- 2022 - a preliminary engineering report for alternative methods and estimated costs of returning the system to compliance.
* July 14, 2023 – Proposed final implementation plan for achieving compliance with the nitrate MCL, prepared by the professional engineer, which includes dates for finalizing the project work.

According to the City’s proceedings from the June meeting the Council heard an “overview of the City’s current wells, data collected on the number of gallons pumped and percentage of water loss the current system is showing. There were several options for compliance that were discussed which included blending, consolidation with another municipality, construction of a new well, rehab of the 62-1 well, building a water treatment plant and point of use and point of entry filters.”

With the information above, the City of Plainview is currently operating on just one well for operation at 530 gallons per minute capacity.

Miller’s report indicated that the City has mainly 4” and 6” pipe, accounting for more than 14 miles of underground water supply for residents of Plainview, and 2”, 3”, and 8” pipe elsewhere accounting for about 1.6 miles. All new pipe was recommended at all 6” piping.

According to Miller’s report, the City of Plainview averages about 86.4 million gallons per year pumped to the homes and businesses on the City’s supply, with an average gallons per day of around 236,000, or 165 gallons per minute from the well capable of 530GPM.
Gauging population estimates for the next 20 years, through 2042, the daily demand was estimated at needing a bit more than the one well could handle, and with only one well pumping, if that one was to go out of compliance the system would have no backup.

Miller’s report used a 336-square mile review of wells, with lowest nitrate samples appearing closest to the northwest of the community, northeast of Brunswick and south of Creighton. Water flow appears to indicate that that supply would eventually work its way to Plainview as north of town the water flows southeast and west of town the water flows east.

Northwest of Plainview also held estimates for the highest water capacity, and to gain the lowest nitrate area, Miller suggested three new sites, all west of Plainview – between three and seven miles west, and seven or eight miles south and southeast, as far as the Foster area.

After the presentation, the Council approved 4-0 to submit the Preliminary report to the Water Wastewater Advisory Committee and the DHHS, which would approve the renovation of well 62-1 – the “Weiseth” Well, at 750 feet that is currently inactive, in the hopes of bringing the nitrate level down and putting the well back into service, and, secondarily sample the water quality near the Plainview Country Club, which was indicated as a possible area for a new City well.

As the timeline persists, more information will be addressed by the Council. In the meantime, the City of Plainview still has water available for those that might be “at risk” for the nitrate levels – including the elderly, those with circulatory issues or infants.
Contact the City Offices at 402-582-4928 with questions.