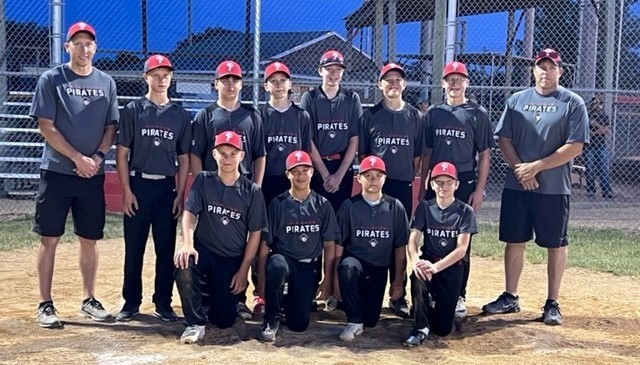 The 2022 Plainview Pony Division boys (13–14-year-olds) finished up their baseball season on Saturday, July 9th at the Quad County tournament held in Neligh.
The boys started tournament play on Tuesday, July 5th with a game Randolph/Osmond.  Plainview came out victorious in this game by a score of 7-1.  They then turned right around and played Hartington and lost to the Wildcats by a score of 11-0 which dropped the boys into loser’s bracket play.

The next game of the tournament pitted the Pirates against Neligh on Saturday morning, July 9th.  Plainview won this game by a score of 8-6.  This was a satisfying victory since the Warriors beat the Pirates 11-1 earlier in the season.
The win over Neligh set up a game against Wynot on Saturday night.  This game went back on forth with Plainview coming up just short by a score of 8-6 which ended their season.

During the regular season the boys competed in the competitive Quad County League, which was made up of teams from Plainview, Creighton, Neligh, Laurel, Randolph/Osmond, Hartington, Wynot, Crofton, O’Neill, and Summerland.
Pitchers for the team were Kohen Lingenfelter, Wyatt Schroth, Zach Frahm, Colt Kromarek, and Trindan Ziems.  Other team members were Bastion Curtiss, Jaegar Frahm, Hunter Meyer, Jensen Kumm, and Brayden Wolken.

The team was coached by Kevin Lingenfelter and Ward Frahm.