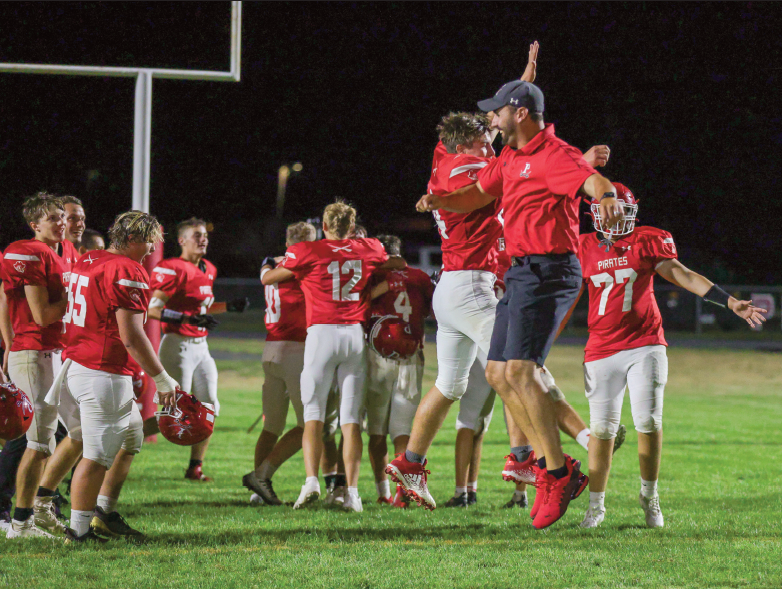 The Pirates got to work early, tying up the Trojans in the first 8-8, and then took a two-point lead with an 8-6 second quarter; 16-14 at the halftime break.

The Pirates capitalized on some well-timed interceptions – four from the Trojan team – to take advantage of good field position and score points. Spencer Hille pulled down three picks from the Trojan air game, and Jacson King had the fourth. Tanner Frahm also caused, and recovered, a fumble.

Points were credited to Jacson King with 16 total points, on two touchdowns, Tanner Frahm had one rushing and Spencer Hille had one touchdown on a reception.

Tanner Frahm posted 287 total yards – 136 from rushing, and he threw and completed 151, to lead the team’s offense. Jacson King had 72 rushing yards and 34 receiving for 106 total.

The Pirates will play Hartington-NewCastle this Friday at the 2022 Homecoming game with kickoff at 7 p.m., and will take to the road on September 9 to Laurel-Concord-Coleridge.

To get high quality pictures from the game, be sure to swing by the SmugMug feature provided by the Plainview News: https://paperandink.smugmug.co...