The Pirate volleyball team traveled to Wakefield on Thursday for the first match of the season.

“The girls took a little bit to get settled and find their groove. Being more consistent with the good things that we put on the court will be key. The girls are high effort and they know how to battle.” said Coach Kim Miller.

Leading the way on the defensive end was Abbie Kromarek with 14 digs. Madelynn Dougherty also covered the floor well with 11 digs. Teya Boyer and Brooke Rafert also combined for a stuff block at the net.

Offensively, Claire Rasmussen played the net well for the Pirates. She put down seven kills with a 0.167 hitting percentage. Boyer carried the set assists for the team with 17 and Dougherty held tough at the service line with four aces.

For the first competition of the 2022 season, a modified JV team got to compete in two sets at Wakefield on August 25, 2022.
The group ended up 1-1 and were not able to play the third set to determine the winner of the match.

“First set, we came from behind to grab the first set victory. The entire group showed great determination,” said Coach Christi Boyer. “Missed serves and lack of communication brought about the loss in the second set.”

Leading the team in serving was Madelynn Dougherty with 100% and three aces.  She also led the squad in the assist column.  Net play leaders were Brooke Rafert and Hannah Darnall.  Rafert with four kills and Darnall with three solo blocks.

“This squad was definitely finding their way together on the court and I wish they were able to finish this match to determine victory,” said Coach Boyer.

The Lady Pirate C-Team went on the road to Wakefield to open up the 2022 volleyball season on August 25.

The Lady Pirates were dominate in a two set victory over the Wakefield Trojans, 25-11 and 25-4. “I was very impressed with the teams’ serving, serve receive and net play,” said Coach Paige Goetzinger.

The Lady Pirates were led on the serving line by Addie Hodson chalking up five aces on a 12 point serving run.  Kenzie Doerr and Emma Sauser captivated the net by having four kills apiece. Peighton Arlt recorded two blocks and Tesla Ickler had four digs.  Mallory Mauer had three aces and six set assists.  The Lady Pirates will travel to Creighton on September 6 for another chance at victory.

On Saturday, August 27, the Pirate Volleyball team hosted Columbus Scotus, Boyd County, and Stuart in the home quadrangular, with the Pirates going 1-2 on the day.

“It was good to get that first win. The girls competed in their games, and hopefully that notch will help us to continue to get better and better every day,” said Coach Miller.
The first game of the day saw the Pirates matched up against Columbus Scotus, with Scotus coming out on top (24-26, 11-25).

Defensively, Keanu Johnson and Abbie Kromarek led the way with seven digs each. Claire Rasmussen had strong net play with three solo blocks and a combined block with Brooke Rafert.

Offensively, Kromarek had a strong attack, recording seven kills. Teya Boyer led the way with set assists at seven. Boyer and Kromarek each recorded an ace at the service line.

Offensively, Boyer recorded eight kills with a solid 0.250 hitting percentage. Rasmussen also had a strong percentage, at 0.273 with four kills. The service line was led by Boyer with two aces and a 100 percent serving completion.

The third game was a good matchup between Stuart and the Pirates.
Stuart came out on top, 1-2 (25-23, 11-25, 21-25). Defensively Keanu Johnson was very strong, recording 22 digs. Claire Rasmussen had a strong defensive net, having a hand in four stuff blocks.

Offensively, the Pirates did a great job of mixing up the attack. Recording six kills each was Kromarek and Boyer; recording five kills each was Rasmussen and Lauren Jelinek.
Jelinek also led the team in consistency with her hitting, marking a 0.158 hitting percentage.

A combined JV/C team got the opportunity to compete in the Plainview Volleyball Quad held on Saturday, August 27, 2022.

“This was again the first time this particular group of girls played together and they adjusted well after a bit of a rocky start,” said Coach Boyer.  Set scores were 6-25, 25-18, and 12-15.

The team took the Columbus Scotus team into a three set match with the second and third sets being much more competitive as the girls “found their groove with each other. So proud of how this squad engaged and came together as a team,” said Boyer.

Leading the crew on the floor were juniors, Jordynn Frahm, Kayci Daudt, Paige Norris, and Katie Mauer. The younger girls in the group stepped up and team members worked hard together.
Second match of the day, the Pirate girls captured a win against Boyd County.

“The hustle and communication adjustments along with running their offense and getting to coverage aided in this victory,” said Coach Boyer.

Team leaders on the day in the serving area was Mallory Mauer with three ace serves, dig category was led by Paige Norris and Peighton Art with five and four respectively, while net play was dominated by Katie Mauer, Kayci Daudt, and Cadence Maertins.  Shayla Jacobsen led the way in the hitting department with four kills followed by Kenzie Doerr with three.

“As you can tell, this was an all around team effort to achieve this victory,” said Coach Boyer.

The Plainview Pirate Volleyball team took on Osmond in Tiger territory on Thursday.
This preseason Jamboree ended in a sweeping win for the Pirates (25-15, 25-11, 25-20).

“The team played well. The first two sets the girls played very consistently. We had a little slow down in the third set, lots of missed serves. But the girls were able to get the job done and finish out the game.” said Coach Kim Miller.

Offensively, the team played very well at the net. Over all, the girls hit a 0.224 hitting percentage and only had 15 errors on 85 attempts. Claire Rasmussen and Abbie Kromarek led the way for the team, hitting 0.357 (7 kills) and 0.333 (12 kills) respectively. At the service line, Teya Boyer had a strong night recording seven aces with a 90.5 serving percentage. Boyer also led the way in assists with 19.

Defensively, the libero Keanu Johnson covered the floor well with nine digs. Hannah Darnall and Boyer also combined for a block at the net.

The team came together on Friday night for a scrimmage during the Fall Kickoff Event to cap off the preseason.

The Pirates were able to show the play of all team members, with C team taking on the JV and the JV taking on the Varsity after (with a few crossing the net to fill positions). The first season opponent for the Pirate Volleyball team was Wakefield; this game was in Wakefield on Thursday with all teams in play.

To get professional and high-quality photos from the game, be sure to follow the link below to the SmugMug feature provided by the Plainview News: https://paperandink.smugmug.co... 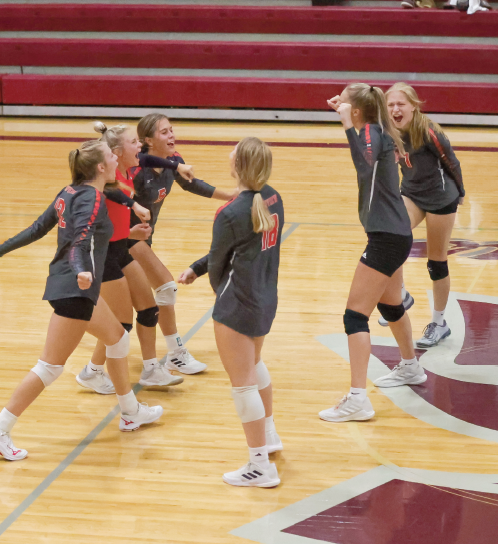