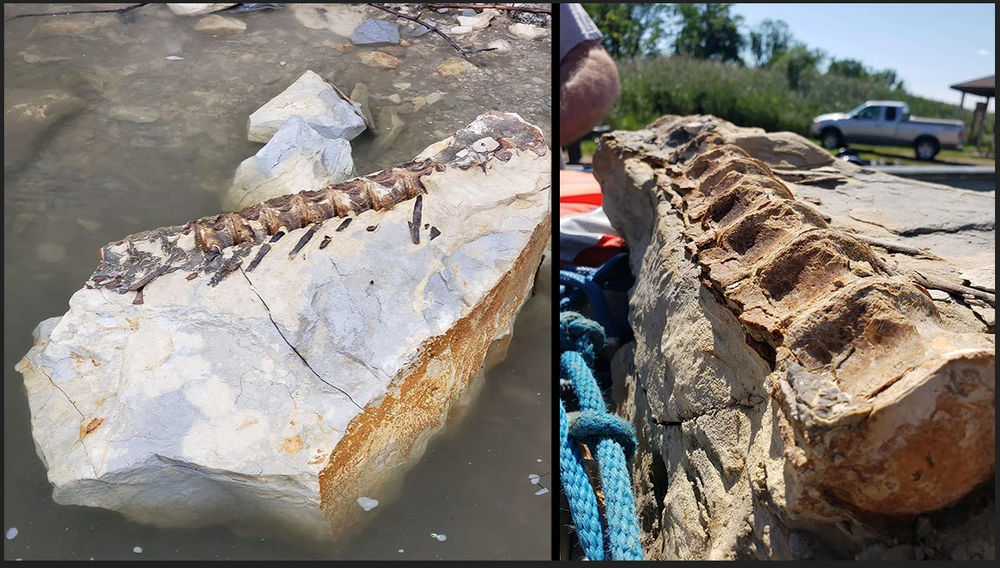 An Elkhorn man made a once-in-a-lifetime discovery in the Missouri River: a fossil of what appears to 90-million-year-old fish.

Fishing is more than a sport for Andy Moore. “It’s the feeling you get when that fish bites your line,” Moore said. “It’s that primordial jolt you get in your spine, and it goes right to your brain.”

Moore got a jolt like no other from his catch at a tournament in mid-August. He was fishing just west of Yankton, S.D., located about 160 miles northwest of Omaha.

At first, Moore wasn’t doing very well in the tournament. “I pitched my jig and it’s horrible. It’s like way left and I’m like oh man.” Moore had snagged the back of a rock and couldn’t get it off his line. So, he paddled his kayak up to the rock.

“I get up to it, and I’m like, ‘Oh wow! That’s kind of cool.’ I thought it was a big catfish skeleton or a deer skeleton. Something told me to take a picture of this.”

So Moore contacted a biologist with the U.S. Army Corps of Engineers. They went back out and found the rock, using the coordinates from pictures on Moore’s cell phone.

The biologist confirmed with 6 News that the fossil does appear to be that of a prehistoric predator fish that’s up to 90 million years old.
“I’m still kind of mind-blown about the whole thing.”

As for the tournament, Moore didn’t do very well. He said this time he doesn’t mind, “because I have the discovery of a lifetime.”

Once properly preserved, the fossil will be stored at the Lewis & Clark Visitor Center on the Nebraska side.