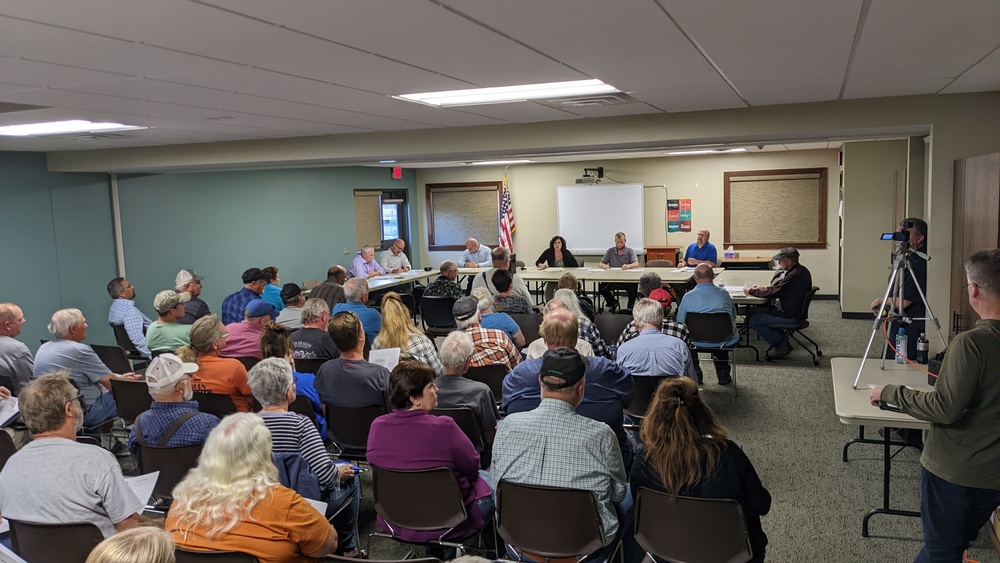 The “inaugural” Joint Public Hearing as required by recently passed LB644 in the Nebraska State Legislature was held at the Plainview Public Library conference room, with near 75 in attendance for the presentation and public hearing on Tuesday, Sept. 27.

LB644 came into law in January of 2022, and with it brought a “pink postcard” alerting all parcel (land) owners if any of their governing subdivisions had crossed a threshold set by LB644 of 2% plus allowable growth in their budgets for the next fiscal year.

This year, a number of Pierce County subdivisions crossed that threshold – Pierce Public School, City of Pierce, Osmond Community Schools, the City of Plainview and Plainview Public Schools – all had to attend with a representative and read aloud their valuation increase, previous year’s levy, proposed increase in budget, proposed levy increase and previous levy compared to this year’s valuation.
With LB644 being under the spotlight in recent months – the subdivisions carried out the letter of the law, reading those required notices, and then, with County Clerk Shannon Wragge mediating the meeting, opened the floor for public comment.

The law stipulates that all those in attendance shall have the right to speak for a “reasonable amount of time” and that attempts will be made for a “reasonable amount” of people to be able to speak.
Everyone that wished to speak was required to sign in, as the Clerk is required by the law to prepare a report about the meeting.
Beyond that – the rules were relatively subjective.

The meeting started with a two minute time per speaker, some counties allowed more, some less; and throughout the meeting, taking into account the number of speakers, Clerk Wragge eventually allowed each speaker three or more minutes to present their comments.

“No less than three minutes was in the original, introduced bill but later changed to “reasonable time” – and Pierce County moved the public comment period to the end of all the presentations at the suggestion of the Nebraska Association of County Officials.

Added to the LB644 interpretation by NACO was a suggestion that was followed making the hearing “not a Q&A session” and informing those in attendance that their comments will not be answered if phrased as a question, and that there would be no “back and forth” at the meeting.
Clerk Wragge did not require anyone to sign in for attendance, but she did ask everyone to name themselves before speaking to turn in the required report to the State.

Following the mandated comments by the subdivisions representatives, the floor was opened for other comments and a few others speakers for each subdivision chimed in with their comments.
Speakers from Osmond, Pierce and Plainview, and numerous farms in between, including some Antelope and Knox County landowners as well – were given time to share their comments, and the entire meeting can be viewed on the Plainview News Youtube channel.

Over the next hour – around 27 parcel owners, some repeaters, gave their thoughts and comments about individual budgets, increased costs, balanced budgets, over spending, cost per student, price of corn, price of land, price of farming and making a living while the government continues to take increases – and a host of other topics.
Most of the subdivisions represented were planning to have their tax request meetings immediately following this meeting on Wednesday, also of this week, to allow time to have the budgets sent in to the State by the September 30 deadline.

The “pink postcard” bill as it has become known – was introduced by Senator Ben Hansen to the Nebraska Legislature, and in an email response to questions, Hansen indicated that there have already been numerous suggestions about how to improve the hearings, and that he is overall pleased with the participation he witnessed at the hearings he himself attended.
He indicated that in the coming months and legislative sessions that there would be a number of amendments introduced to make the bill more informative, more active and more effective for the taxpayers of Nebraska.