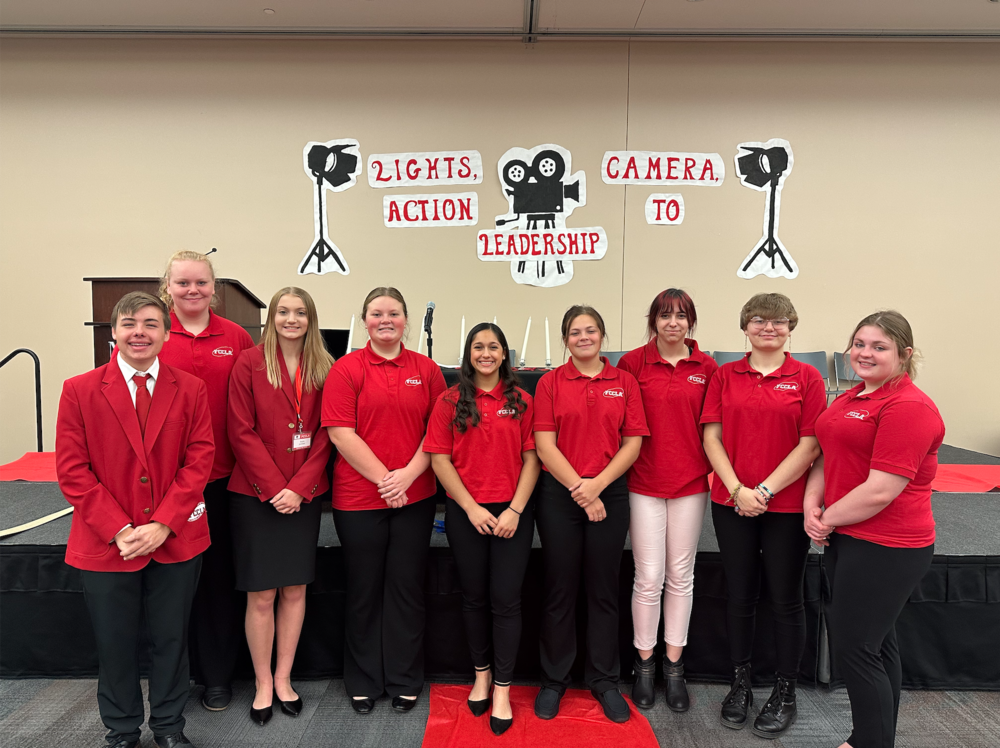 This past week, nine members of the Plainview FCCLA chapter traveled to Northeast Community College for the District 8 Leadership Conference.  The theme for this year’s conference was “Lights, Camera, Action to Leadership.”

The day started off with the opening ceremony and introduction of the district officers.
The District Officer Installation was then held with Weston Hoffman being installed as a district representative.

The keynote speaker for the day was Hunter Radenslaben.  He is a Nebraska-based speaker, entrepreneur, and founder. After building a social media brand to over 90,000 followers in high school, Hunter’s passion for making an impact has led him to start multiple ventures and share his story to students throughout the Midwest.  Hunter explained that “After losing my mother to cancer, I'm passionate about living my life for something bigger than myself — and encourage others to use their voices to make the world a better place.”

“My favorite session was Jazzercise. Jacquie was really putting us to work!  It was really fun, and they interacted with us.” said Baili Prewitt. “The father talking about his son with autism was relatable and eye opening since I have a sister with special needs.” Explained Averi Waldow. Brooke Forbes also enjoyed that session adding, “I thought it was an amazing session to sit through since I plan to become a pediatric nurse.  This was an eye opener to respect parents with children who have disabilities.

Another favorite session was the Nebraska State Patrol where they learned about the effects drugs, alcohol, and drowsiness can have on the body and on driving. Students wearing the different goggles said they felt queasy, couldn’t see, and felt disoriented. Students were definitely not able to walk a straight line or even stand up straight. Students were also shown the importance of wearing a seatbelt by using the roll-over simulator.  A simulation to show the importance of wearing gloves during crime scene investigations was also held.

During the Closing Ceremony, Power of One Award Certificates were presented to students for the modules they completed last year.  Receiving certificates from Plainview were Shayla Jacobsen “Speak Out for FCCLA” Module; Brooke Forbes, Weston Hoffman, and Marque Albin with “A Better You” Module; and Shayla Jacobsen and Brooke Forbes with “Working on Working” Module.

During lunch, members competed in the FCCLA Knowledge Quiz Bowl. Participating in the Quiz Bowl for Plainview were Captain Marque Albin, Averi Waldow, Shayla Jacobsen, Weston Hoffman, and Baili Prewitt. They did extremely well, winning each match making it to the finals.  The final round came down to the bonus question which is where they came up short. The team each received certificates of participation and a Runner-up Certification of Recognition for their efforts.

Members also had the opportunity to participate in a bucket auction.  The money raised from the bucket auction was donated to next year’s state officers and national STAR participants to assist with travel expenses to National Conference in July.