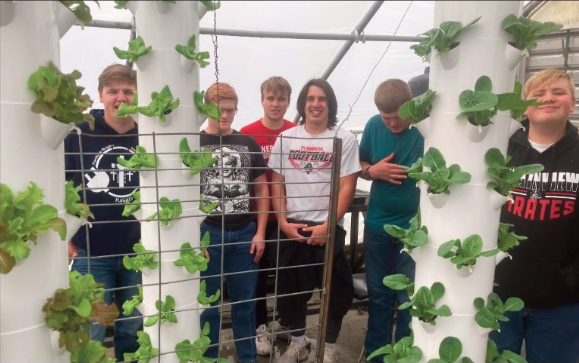 ‘Let Us Eat Lettuce’ - In November?

Plainview Public School’s Horticulture class has, as of today, Wednesday, officially opened a “winter produce market” operating out of the greenhouse at the school – made possible by 10 aeroponic towers that were recently purchased and installed.

Ag Teacher Chad Kment said that through two grants, and hopefully a few more to come, the school had been able to purchase seven more hydroponic towers, and add to the three the school already had – giving the class the ability to grow produce in what would normally be an “off season” for the market.

A number of agricultural class members at PHS, along with some FFA members, had started selling products during the Plainview Farmer’s Market all summer in the Band Shell Park. With the Farmer’s Market closing for the season, the Horticulture class hoped to continue offering produce to the community, prompting the need for some more towers.

The class already had three of the aeroponic towers that had been used to provide some produce during the summer months – but with the FFA Winter Market becoming the sole provider, they needed to be able to grow much more to keep up with demand. Kment contacted Audria Kirchhoff, from Grow Hope Farms, who had helped the school obtain the first three towers and had asked about getting some more.

With a successfully funded grant application to Carbon Solutions and Bayer – the school was able to purchase seven more towers, bringing the total to 10. Kirchhoff, at her farm, uses the same Tower Farms aeroponic towers. The towers consist of a large holding tank at the bottom, and, currently, nine stackable “pots” that have four “growports” each holding one of the seedling plants – providing 36 plants per tower.

Water comes from the nearby hydrant, and into the injector, which mixes with two tanks of specialized fertilizer into a bulk tank, which then feeds the 25-gallon holding tanks at the bottom of each tower on a system not too different from a “float” in a stock tank. The water is then pumped to the top of each tower and trickles down through the freehanging root system of each seedling pod, watering and fertilizing the plants.

Anyone purchasing the lettuce will notice that they will receive the lettuce attached to the root ball – which allows the lettuce to remain fresher longer, and can be stored in the refrigerator whole. Since the produce is not grown in the dirt, it is exceptionally clean as well. Kment said that the horticulture class members was originally tasked with constructing the towers, and installing and hooking up all the hoses in the greenhouse, then adding the fertilizer and bulk tanks and hooking up all the towers to the water system.

Those class members are Reagan Choat, Brendan Weber, Kaiden Eichberger, Tanner Stolp, Anthony Ziegenbein, Sean Taylor, Ashton Donner and Logan Deitloff. Now, with harvest starting this week, the class has spent the last few weeks creating specific timelines, creating harvest patterns and beginning the marketing for the sales to make sure that the harvest happens on a regular schedule (pending any breakdowns of equipment.)

A backlog of seedlings already started have been growing for three or four weeks, which will then be used to move into the system to create a steady flow of produce throughout the winter. To that end, two additional students, who are volunteering time out of class as part of the FFA – Roni Prewitt and Marlena Curtiss – have been working behind the scenes. Prewitt has been tasked with creating most of the group’s social media and “marketing” of the winter market, and Curtiss has been monitoring the pots and plants in the off and after-school hours.

The effort has placed Plainview Public Schools in a rather select group of schools in Nebraska featuring these types of towers – Kment estimates that Plainview is by far the first in northeast Nebraska, and one of perhaps three or four high schools using this type of system. A few local colleges have similar setups.

The Winter Market offerings will be primarily lettuce products – romaine, buttercrunch and leaf lettuce – but there is some special work going into providing tomatoes, cucumbers and even green beans. 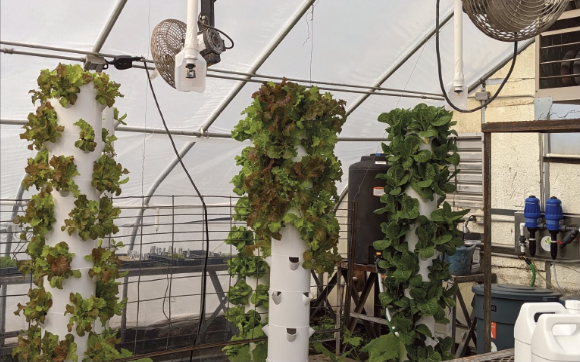 The Tower Farms aeroponic towers are already in full “bloom” with lettuce available for the Winter Market.