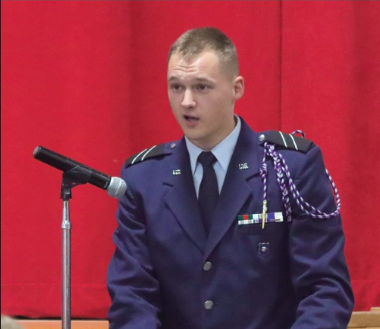 Alum Was Keynote at Veterans Day

The 2022 Veterans Day program was held in the Pirate auditorium at Plainview Public schools last Friday, Nov. 11 with students, teachers, administration and members of the public in attendance.

This year’s keynote speaker was Colton Choat, a 2021 graduate of Plainview Public Schools, and current member of the United States Air Force. Choat spoke about his time this far in the service, and remarked about the unique opportunities it had already provided him.

He said as part of his ROTC group at the University of Nebraska – Lincoln, he was chosen to help with the Air Force flyovers at each home Husker game by being part of the two-person team to call in the planes. Choat said he was also allowed to watch the game from the sidelines and meet some extraordinary Huskers – Tom Osborne and Johnny Rodgers.

Choat encouraged those that may find themselves in a situation of desiring to serve to investigate the United States military as the ultimate option for service.

American Legion Commander Corrine Janovec took time to remark about the project under way at the fire hall land on the west end of Plainview – a new veterans memorial.

Janovec said the late Butch Frahm and herself had begun investigating moving the bell from Chilvers Park, and the older veterans memorial, to the fire hall land a number of years ago, and had received approval, but before the work began, Frahm had passed away during a trip.

Janovec said that the bell, flag poles and a new flag disposal construction, designed and cut by the Plainview Ag Shop students, will be installed shortly in the new memorial, and that a ribbon cutting event has been planned for July of 2023.

Dr. Darron Arlt, Sgt. Ret., spoke about the origins of Veterans Day, delivering history of the day’s original creation after World War I, and how it became the national holiday of today.

Teya Boyer and Jordyn Frahm were also speakers, retelling the story of their recent trip to Washington D.C. and the Plainview representation in the laying of the wreath ceremony at the Tomb of the Unknown Soldier. A short video of their part in the presentation was also shown.

Musical selections were played and sang by the High School Choir, Junior and High School Band, elementary students and middle school students as well. Taps was provided by Lauren Jelinek and Marlena Curtiss.

American Legion Post 148 and Auxiliary members served as the Flag Corps for the day. 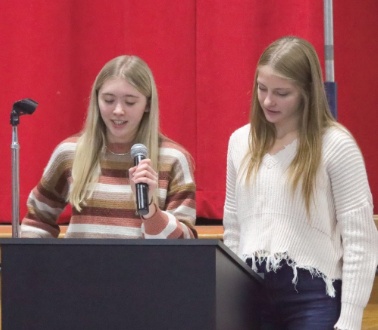 Jordynn Frahm and Teya Boyer presented about the placing of the wreath. 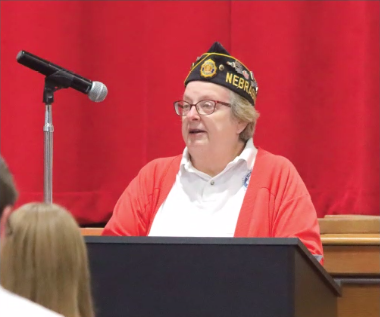 Corrine Janovec updated those present on a new project in Plainview. 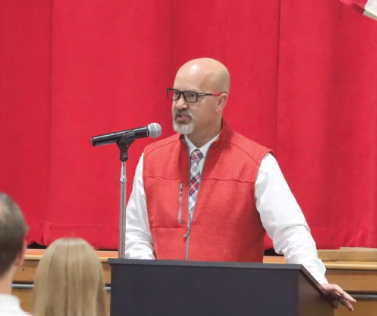 Dr. Darron Arlt served as emcee for the event. 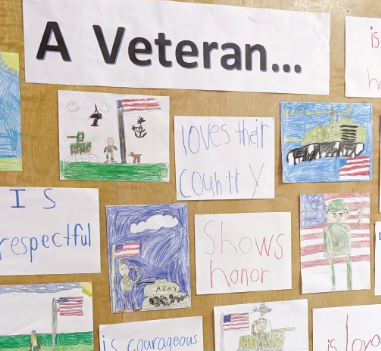 Artwork, memories and tributes covered the walls of the gym entryway.