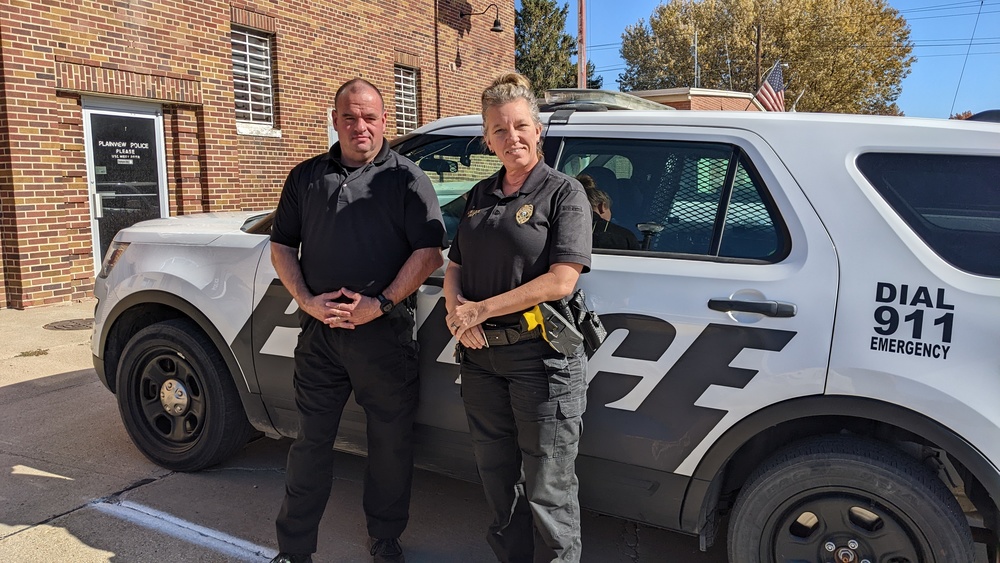 Andrew Funston has joined the Plainview Police Department bringing the local coverage back to two as he joins Chief Kristy Hallock in community law enforcement.

Funston has a background that spans a scope of the United States Marine Corps, private security, Department of Corrections, contracted service to the federal government, probation and a distinct love of “cops and robbers” when he was younger, noting that he always had to be the “cop.”

He holds an undergrad degree in Criminal Justice, and a Masters Degree in Service in Management with a concentration in Homeland Security. “I’ve always been a competitive officer,” said Funston, “I wanted to have the highest education, highest experience level and the most life experience.”

Gaining all three of those took him into the United States Marine Corps for four years, on two combat tours to Iraq; special ops training while he was serving; working with the Department of Corrections in Texas; before moving back to Washington and working contract security for the federal government and Homeland Security – a position he held for 14 years.

Funston is originally from Seattle, Washington, and moved to Plainview a few months after his family had moved to Plainview to be closer to family that lives in North Platte. His wife, Jennifer, started at the local dollar store, but now works in Norfolk, and they have one older son.

When the family first moved to Nebraska, Funston worked as a probation officer for the State of Nebraska, covering nearly the entire northeast corner of Nebraska. He said he really enjoyed the job, but said he disliked sitting in the office all day, wanting to be more active.

While looking for a new position, Funston said he was eventually tasked to pick between a job on the police force in Norfolk, or in Plainview, and eventually the family chose Plainview – mainly for the culture and community.

“Plainview’s culture is just better,” said Funston, “a community of great people that treat each other with respect. We really wanted that for our son. All towns have their challenges, but I want to help keep Plainview the way it is – help keep that feeling of safety and security and welcoming to everyone.”

With Chief Hallock at the helm – “she’s keeping me up on everything, she has a lot of visions for the police department, and I want to help with that.”

Funston will be attending the Nebraska training academy for the January through April class, and then will continue to train with Hallock on the job before being officially sworn in.