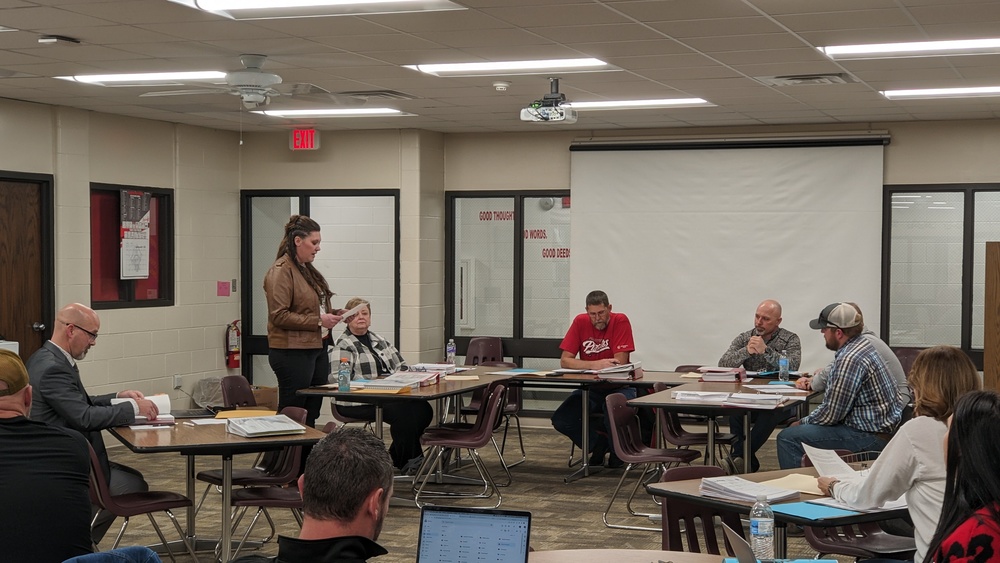 Rasmussen Takes Helm on Board of Ed

The Plainview Board of Education met on January 9, to install its new member, and reorganize the board, among other items.

Following the installation of newly-elected Board member, Melissa Doerr, the group went through a series of votes to elect a new board president and other officers. For President, Mike Sauser and Tim Rasmussen were nominated, and following a series of 3-3 tie votes, eventually the 4-2 vote came in for Rasmussen, placing him as president for the next year.

The Vice-President vote went much the same way for a few rounds - with Mike Sauser and Wyatt Frahm nominated. Eventually, both candidates mentioned that they wouldn’t mind stepping aside, and Sauser took the last vote 4-2 to become the group’s second in command.

Deb Jensen was chosen as the group’s Secretary/Treasurer on a 3-2-1 vote with Frahm and Chance Anderson receiving the other number of votes. Superintendent Contract Dr. Darron Arlt’s contract as superintendent was approved last month, but the details and terms were yet to be decided, as the

Budgeting committee reported that they had negotiated and determined the detail of Arlt’s requested adjustment for this year. Board members Sauser, Rasmussen and Frahm all gave their input on what they suggested to accommodate Arlt’s request to lower his cash-in-lieu from 75% of a family insurance plan to 60% of a family insurance plan ($19,257 to $16,500), and move those funds to a salary number instead.

In the end, Arlt received about a 5% salary increase, from $144,250 to $151,500 per year; and a $2,757 reduction in his cash-enlieu, for a “total package” presented to the Board of an increase from $163,507 to $168,000. The website’s transparency publication marks a different number for total package estimated around $194,391 before the adjustments, but includes his retirement/taxes contribution from the district, as well as his association dues and cell phone reimbursement as included in his contract.

The Board approved the additional changes to the terms of the Superintendent contract on a 4-2 vote - Chance Anderson and Melissa Doerr voting “no” and Mike Sauser, Tim Rasmussen, Wyatt Frahm and Deb Jensen voting “yes.”

The Board then passed similar considerations for both Principal Kyle Schmidt and Principal Jen
Hodson - to offer a contract this month, with terms to be decided next month.

In other business the Board:
* Heard of an interview with a band instructor from the Philippines that wishes to come to the U.S. to teach.
* Heard of a documentary that will be filmed this week at PHS.
* Heard that the HVAC system upgrade may not be completed until this summer. The entire meeting can be viewed on the Plainview News Youtube channel in the next few days.